This is the third post in a series on Katie Mann and Kasra Rafi’s paper Large-scale geometry of big mapping class groups. In the previous post we explored an obstruction to coarse boundedness, while in this one we will introduce a sufficient condition for \(\operatorname{Map}(\Sigma)\) to be coarsely bounded. This post includes proofs that closely follow those in the paper, which while elementary, get a little involved. I imagine this will be one of very few moments in the series where I give full proofs.

Suppose that \(\operatorname{Map}(\Sigma)\) is coarsely bounded. Then by the contrapositive of the result of the previous post, if \(S\) is a finite-type subsurface of \(\Sigma\), there must be a homeomorphism \(f\colon \Sigma \to \Sigma\) satisfying \(f(S) \cap S = \varnothing\). Therefore by the examples given at the end of the previous post, if \(\Sigma\) has finitely many maximal ends, it has at most two, and if \(\Sigma\) has nonzero genus, it has infinite genus. In fact, by a variant of the former condition, if \(X \subset \operatorname{Ends}(\Sigma)\) is a finite, \(\operatorname{Map}(\Sigma)\)-invariant set, it has cardinality at most two. (I got worried here a little: what if the invariant ends are isolated and planar, i.e. punctures? But then I realized: any subsurface containing all the finitely many punctures of \(\Sigma\) would be nondisplaceable.)

is a decomposition into finitely many clopen subsets, one of them, say \(E_1\), contains a clopen subset \(D\) as above.

Anyway, suppose that \(\Sigma\) has infinite or zero genus and self-similar end space. We first show that each finite-type subsurface \(S\) of \(\Sigma\) is displaceable in a strong sense: after enlarging \(S\), we may suppose that each boundary component of \(S\) is separating (i.e. removing it cuts \(\Sigma\) into two pieces) and complementary component of \(\Sigma - S\) has infinite type and infinite or zero genus; the complementary components in \(\Sigma - S\) together with the finite set of punctures of \(S\) partition \(\operatorname{Ends}(\Sigma)\) into finitely many clopen subsets, so some complementary component, call it \(C_0\), has end space containing a clopen neighborhood homeomorphic to \(\operatorname{Ends}(\Sigma)\) (respecting the subspaces of nonplanar ends).

Before we sketch the proof, here’s an example. The surface \(\Sigma\) has a Cantor space of ends, of which exactly one is accumulated by genus. This end space is self-similar, because any clopen subset of a Cantor set is itself a Cantor set, and after chopping the end space into finitely many pieces, one piece contains the nonplanar end, and that piece is therefore homeomorphic to the whole end space. Suppose \(S\) is a pair of pants (a genus-zero subsurface with three boundary components) cutting the end space into three pieces. The claim is that within the piece that contains the nonplanar end, there is a pair of pants \(R\) disjoint from \(S\), a homeomorphism of \(\Sigma\) taking \(S\) to \(R\) and the “big” complementary component of \(S\) to the “big” complementary component of \(R\) (i.e. the ones containing the nonplanar end). In this case, the intersection of the “big” components is again homeomorphic to a Cantor set of ends with one nonplanar end. By the way, Ian Biringer suggested the name “Cantor tree in early spring” for the surface \(\Sigma\); I’m a fan. 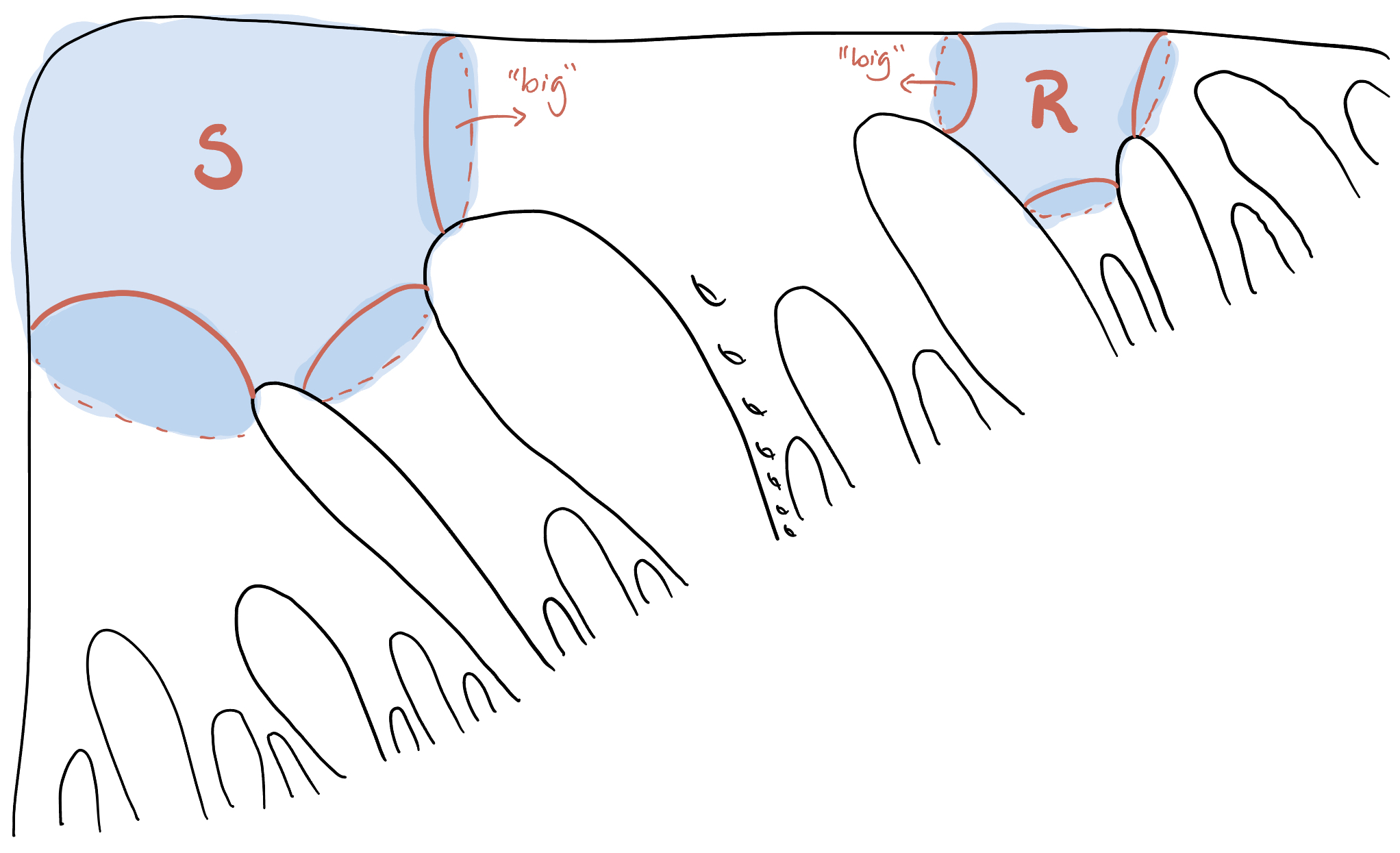 It is clear (replace \(P_S\) with \(P_R\), erase the primes and use the decomposition of \(D\) above) that this latter set of ends \(E^R_0\) is actually homeomorphic to \(E_0\) respecting the subspace of nonplanar ends. Depending on your comfort level with arguing about subsurfaces, this may take some thought. I further claim that we can do this so that each complementary component of \(\Sigma - R\) also has infinite or zero genus (necessarily according to whether the “corresponding” component of \(\Sigma - S\) does). For me the key observation in both claims was that I really could shuffle finite amounts of genus around to arrange this.

Note that since we only ever enlarged \(S\) to get it to satisfy all the technical things we desired, the lemma is actually true for smaller finite-type subsurfaces as well. Anyway, the lemma is the main tool to prove the following theorem.