Let’s once again fix a group \(G\) that acts cocompactly on a tree \(T\). In the previous post we defined what it meant for an edge of \(T\) to be surviving or collapsible. Collapsing orbits of collapsible edges in \(T\) yields a new tree \(T'\) which we say is obtained from \(T\) by forest collapse. Two trees \(T\) and \(T'\) are in the same deformation space if there are \(G\)-equivariant maps \(T \to T'\) and \(T' \to T\). The set of \(G\)-equivariant homeomorphism classes of trees in the same deformation space as \(T\) all of whose edges are surviving is partially ordered under the operation of forest collapse, and this partial order contains minimal elements, which are reduced trees. To study this poset, or its geometric realization \(L_T(G)\), it would be convenient to understand all trees collapsing onto a given reduced tree. This is captured in the idea of an ideal edge, which I’d like to describe in this post. The idea of an ideal edge goes back to Culler and Vogtmann’s original paper on Outer Space; the treatment here is adapted from a paper of Krstić and Vogtmann.

Suppose \(T'\) is a tree such that collapsing the orbit of an edge \(\tilde e\) incident to \(v\) yields a tree equivariantly homeomorphic to \(T\). If we suppose that \(T'\) is minimal, has no subdivision vertices and that every edge of \(T'\) is surviving, we can make the following observations:

Furthermore conversely, if we have a subset of \(\operatorname{st}(\tilde v)\) satisfying the above three properties, we can “blow up” the tree \(T\), inserting a new edge orbit \(\tilde e\). 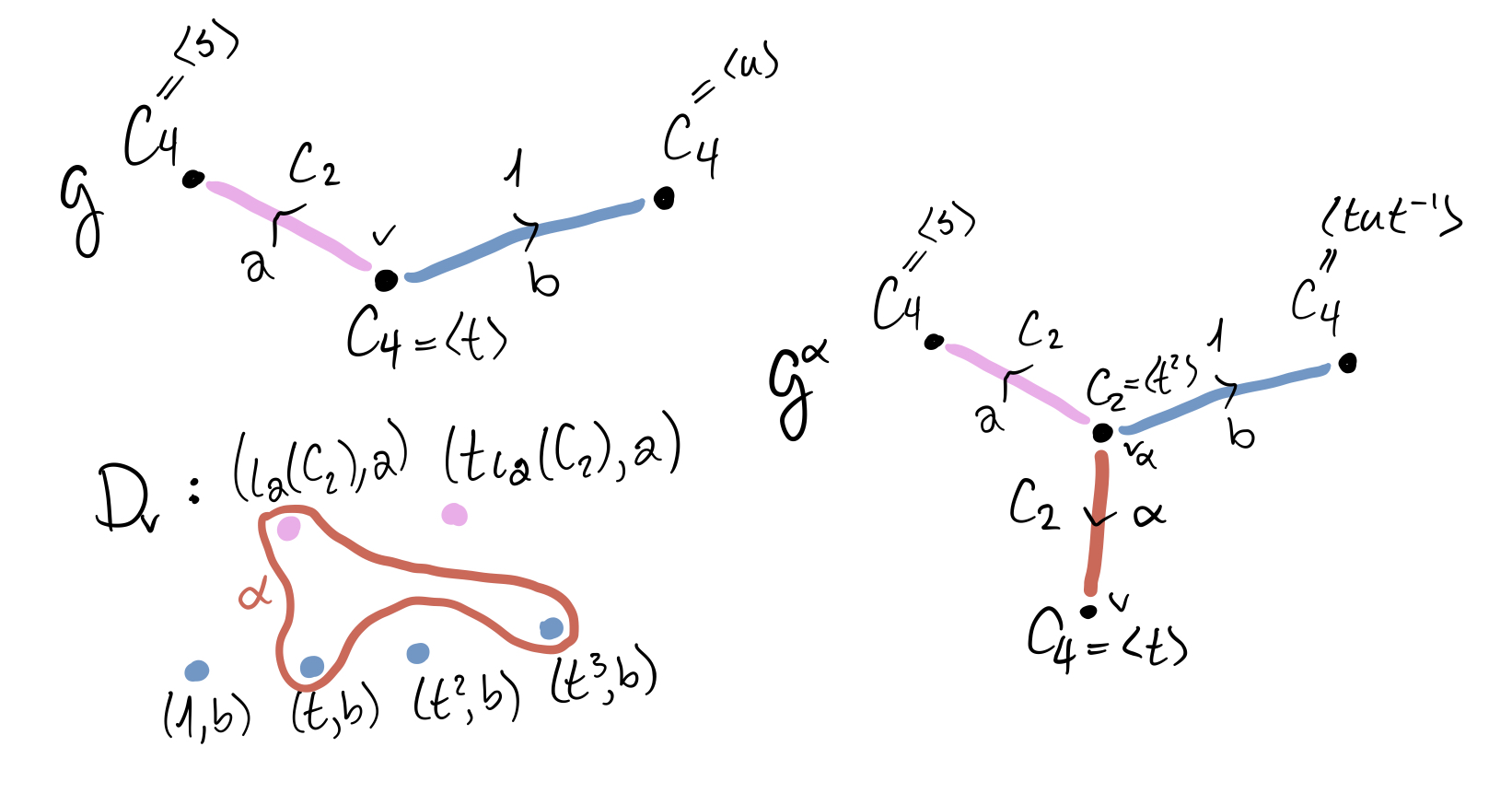 A pair of ideal edges \(\alpha\) and \(\beta\) are pre-compatible if they are compatible, or \(\alpha\) is invertible with inverse \(\bar\alpha\) and \(\bar\alpha\) is included in \(\beta\). It follows that \(\beta\) is invertible and that \(\bar\beta\) is included in \(\alpha\). An ideal forest is a collection of pairwise pre-compatible ideal edges containing the inverse of each of its invertible elements. We can complete each oriented ideal forest \(\Phi\) to an ideal forest \(\Phi^\pm\) by adding the inverses of each of its invertible elements. Krstić and Vogtmann prove for graphs of finite groups as Lemma 5.7 of their paper that if \(\Phi^\pm = \Psi^\pm\) as ideal forests in a reduced marked graph of groups \(\tau\), we have \(\tau^\Phi = \tau^\Psi\) as marked graphs of groups. Again for graphs of finite groups, Krstić and Vogtmann prove as Proposition 5.9 that the poset of marked graphs of groups in \(L_T(G)\) collapsing to a reduced marked graph of groups \(\tau\) is isomorphic to the poset of ideal forests in \(\tau\).